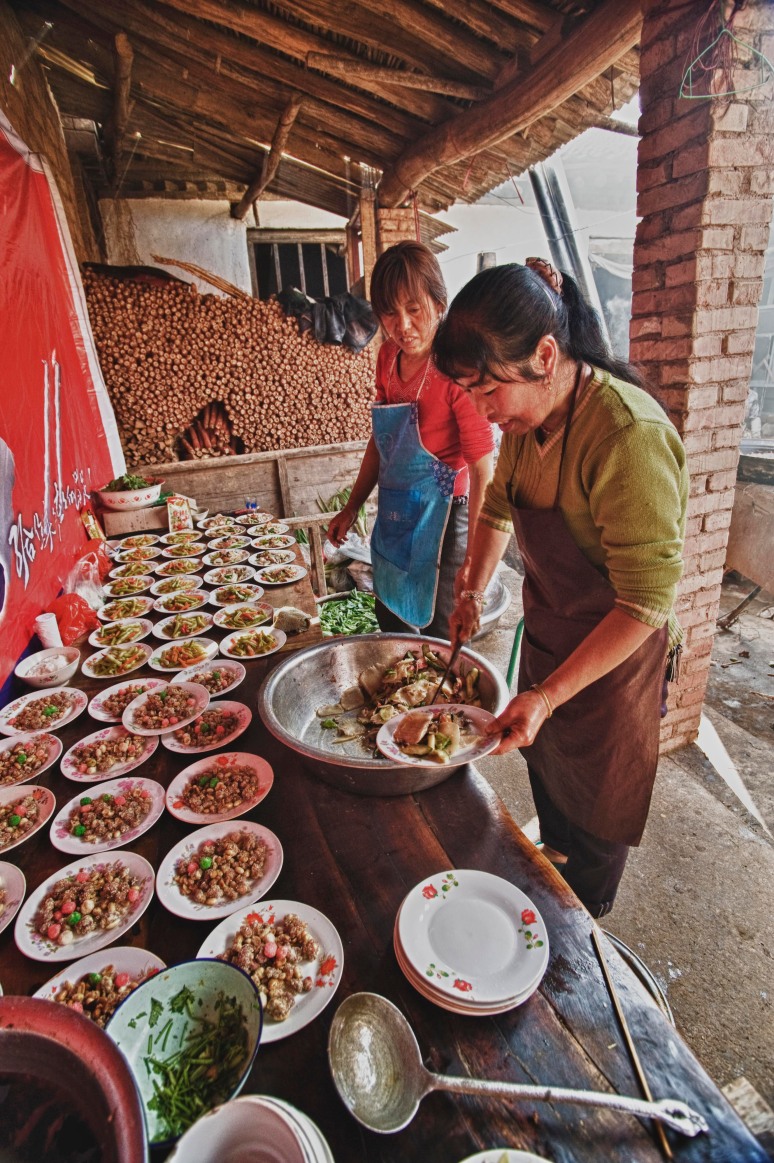 With military precision, the wedding banquet dishes were plated up by the ladies of the village, hundreds of dishes were presented and every villager received at least six courses, one soup dish, one vegetable dish, one chicken and vegetable stir fry, one fish dish, one pork with vegetables and one noodle dish followed by fresh fruit, wedding cake and lots of Baijiu a very potent rice / grain wine for the toasts. This process took place for three consecutive days and three meals were prepared each day to feed all the villagers at least 5 to 6 hundred at each sitting.

Baijiu is a clear drink usually distilled from sorghum, although sometimes other grains may be used; baijiu varieties produced in southern China are typically made from glutinous rice, while those from northern China are generally made of sorghum, wheat, barley, millet, or occasionally Job’s tears. The jiuqu starter culture used in the production of baijiu mash is usually made of pulverized wheat grains.

Because of its clarity, baijiu can appear similar to several other liquors, but generally has a significantly higher ABV than, for example, Japanese shōchū (25%) or Korean soju (20-45%).

Chinese wine, which has been made for over 5000 years, characterized by double fermented semi-solid state fermentation using fungi as main microbial starter for the saccharification and fermentation agent. This is a typical feature of wines produced in the far east. Chinese baijiuis mainly brewed with grain except for a few kinds using fruit.

In China, baijiuis generally not viewed as necessity, but has its unique place in social life. One can get a glimpse of Chinese politics, economy, farming, commerce, and culture through the history of baijiu. Baijiu is deeply ingrained into all aspects of Chinese society.

Chinese people have always celebrated important occasions with alcohol. They will invite their close friends to a drinking session when someone moves in a new house, marries, starts a new business, even when their children get in a good school. In ancient times, soldiers would celebrate by drinking baijiu after winning a battle. If a warrior fell in a battle, his fellows would scatter baijiu on the ground as part of a memorial ceremony. Today, people just play simple finger-guessing, depending on the volume of drink being consumed. A common phrased exchanged would be, “If we are good friends, then bottoms up; if not, then just take a sip”.

Chinese traditionally serve baijiu either warm or at room temperature in a small ceramic bottle. They then pour the baijiu into small cups. Baijiu may be purchased as a set of items consisting of bottles of baijiu, a small heater, and four to six small cups. The serving method and containers are similar to those used for sake and soju, though baijiu differs significantly. Baijiu is generally sold in glass or ceramic bottles and consumed in shot glasses, much like vodka. It is traditional to drink baijiu with food rather than on its own, though the latter is not uncommon.

6 thoughts on “Plating Up”